I love Halloween. It’s one of my favorite holidays. There’s no presents to buy, not much cooking involved, and everyone gets to be creative and be whoever they want to be. It’s the best.

Elliot and I decided to throw a Halloween party this year so, I thought I’d share how we managed to do it, without going crazy.

Here are my tips on having a great Halloween without breaking the budget:

1. Goodwill is your friend.

It has literally been years since I bought a costume in a store or online. Not only are homemade costumes cheaper, but they usually turn out a lot better!

Since we were hosting the party, we thought it’d be fun to go with the creepy theme by being an undead bride and groom. Elliot found his jacket in a few minutes, I loved the first dress I tried, and we even managed to find some old curtains for a veil! All for under $15.

With all the Halloween excitement, I couldn’t help but do a little “research” on Pinterest to get some inspiration. People seriously have a lot of time on their hands.

As exciting as it is to have a house filled with little critters, jars of goo, and skeletons, I just can’t imagine spending tons of money and creating all this stuff just to store it in a box for a year.

So, Elliot and I thought that the true way to make things creepy would be to keep it simple. We bought a couple bags of fake cobwebs, some old cloth, black spray paint, a box of red candles, and a black light. We kept some flowers from earlier this month to dry out and display. Elliot sprayed some tree branches black for a creepy look. We also played some spooky music in the background as guests arrived. 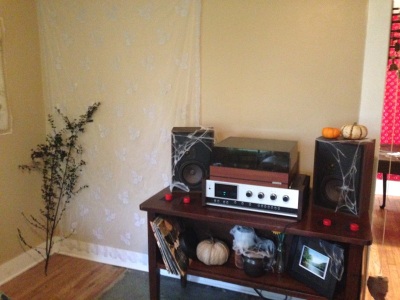 It may not look like much, but our little house was FILLED with candles and had no bright lights on. With just a few extra accents, our place looked plenty creepy. I wasn’t sure how it would turn out, but it was a hit!

3. For the bigger stuff, go to Amazon.

When we did want to buy some more expensive things (and by that I mean over $10), we went to Amazon. We got our big box of red candles for pretty cheap and they were one of the biggest parts of our decoration.

We also bought our black light on Amazon. It was much cheaper than I expected and I imagine it was a whole lot cheaper than it would be in a Halloween store.

When it comes to the black light, we recently learned that tonic water glows blue under a black light. What an easy way to get a cool effect! We provided everyone with vodka/gin and tonics for the evening. Simple, until the black light comes on. 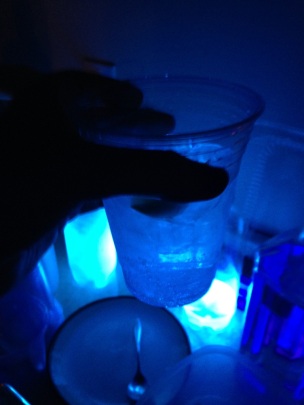 Another creative way to wow guests is to use dry ice. We were planning to, but our grocery store was completely out by Halloween day. In the future, I hope to include dry ice. All you need to do is have a big pot filled slightly with warm water, drop the ice in, and you’ve got some witchy looking steam filling up your house.

5. Finally, ask guests to pitch in!

I could have spent my whole Saturday and too much of my paycheck to make (or attempt) unbelievable Halloween recipes from Pinterest. Instead I asked each guest to bring something (big, small, or even a bag of candy) and had a lot less stress on me.

I also want to mention that we had a costume contest with a trophy (literally made out of junk) as the prize. We thought of it last minute and the trophy was pretty insane, but everyone was so motivated to win! Next time, we’ll have to ask people to only vote a couple times however…

Thanks so much for reading! I hope everyone had a great Halloween! 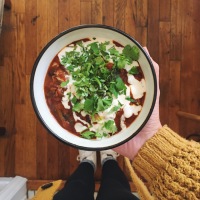 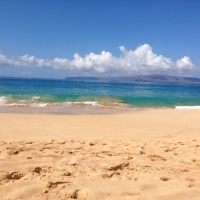